This event has already taken place! Please make sure you are in the correct year. ×
Feb
23
Tuesday
Feb
23
Tue 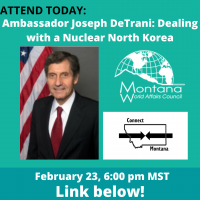 On July 27, 1953 an armistice was signed ending the war with North Korea. The casualties from that war were massive and North Korea's behavior over the decades following the war has been egregious. Starting in 1994, however, North Korea engaged in negotiations with the U.S. to normalize the relationship. These negotiations, with periods of fleeting success, have failed to resolve issues with North Korea. In fact, North Korea now has reportedly from 20 to 60 nuclear weapons and missiles that can deliver these nuclear weapons to the whole of the U.S. Negotiations continue with North Korea, to commit the North to complete and verifiable denuclearization, in return for the lifting of sanctions, security assurances and a path to normalization of relations.

Ambassador DeTrani was the U.S. Special Envoy for the Six-Party Talks with North Korea and the U.S. representative to the Korea Energy Development Organization. He was an Associate Director of National Intelligence and Mission Manager for North Korea and the Director of the National Counter Proliferation Center, while also serving as a Special Adviser to the Director of National Intelligence. After government service, he was the President of the Intelligence and National Security Alliance (INSA), a professional think tank and President of the Daniel Morgan Graduate School of National Security. Currently, he is on the Board of Managers at Sandia National Laboratories and is a Senior Advisor at Oak Ridge National Laboratories and a professor at Missouri State University’s Graduate Department of Security and Strategic Studies. He is a member of the Council on Foreign Relations and the National Committee on North Korea, a Fellow at the Institute of Korean-American Studies and a Rochester Institute of Technology/National Institute of the Deaf Foundation Board member. Ambassador DeTrani served over two decades with the Central Intelligence Agency as a member of the Senior Executive Service, with overseas assignments in East Asia and domestically as Director of Technical Services, Director of European Operations, Director of Public Affairs, Director of East Asia Operations and Director of the Crime and Narcotics Center. Ambassador DeTrani was an officer in the Air Force and graduated with honors from New York University (NYU). He attended NYU School of Law and Graduate School of Business Administration. He speaks Mandarin, Chinese and French. He has published and spoken publicly on issues dealing with North Korea, China, Cyber security, nuclear nonproliferation and international organized crime.
Register Now
Links: https://www.facebook.co.....anaWorldAffairsCouncil/